Hola dudes. Tano says thanks for the birthday wishes. 🙂 I thought I was going to have to work late tonight. Since that was called off, I decided to take a quick trip to The Yarn Tree. I love going there. Linda is super nice and remembers me all the time and that’s important to me. So here’s my first knitty purchase of 2008. 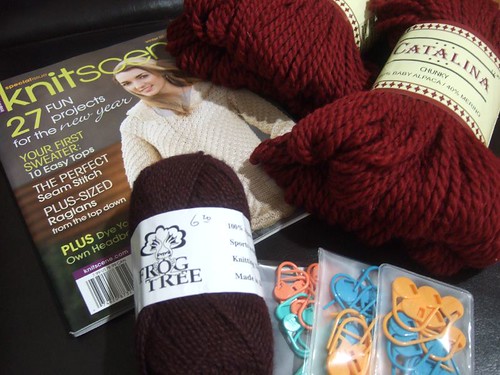 I caved and bought the new KnitScene. When I first saw the preview online, I wasn’t crazy about most of the stuff in there. Upon closer inspection, it ain’t half bad. There’s a couple of things in there that are cute and interesting. And plus, I’m almost 100% positive that if I DIDN’T get it, I’d want to make something that’s in it 6 months from now when I can’t find the magazine ANYWHERE! 😆 I bought some Frog Tree Alpaca to finish my Somewhat Cowl that has been put off to the side because of lack of yarn. I also bought two skeins of Catalina Chunky Alpaca to make myself a hat similar to Shameka’s MJ hat. I just want a square top so I’ll be shooting for that. Speaking of WIPs, here’s a list of all those that I brought into 2008 (all of these link to my Ravelry project pages):