Have you ever heard the saying, “No hagas una tempestad en un vaso de agua?” (Translation: “Don’t make a storm in a cup of water.”) This is usually me. I’m usually the one to freak out over small things and then later say, “ok, it’s not that bad!” 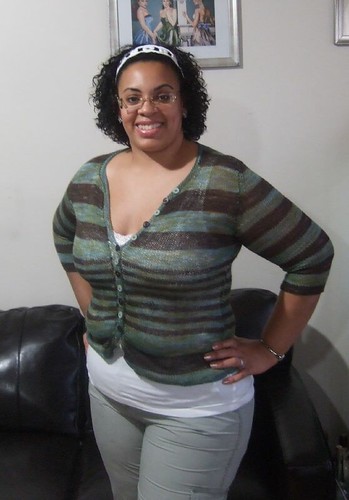 This knit reflects NONE of that attitude! When I first saw this pattern in Knitty I told my friends that I would NOT be making a cardigan where I had to sew 14 buttons!! HELL NO! Yea, well, I ate those words. Happily. 🙂 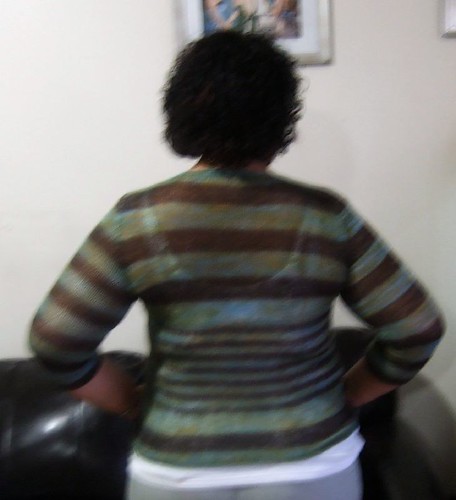 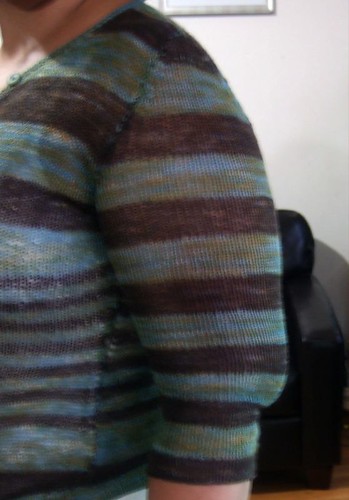 And look! A cardigan that actually BUTTONS all the way down for me!! WOO HOO! 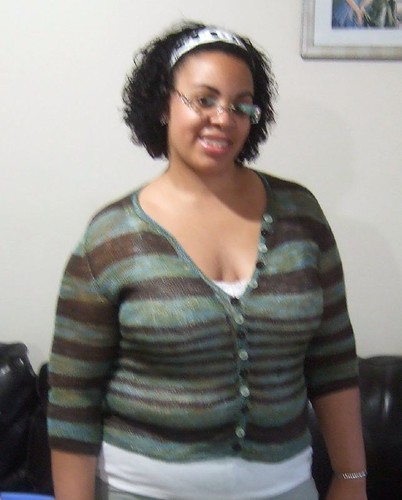 One of my favorite features is the buttons. 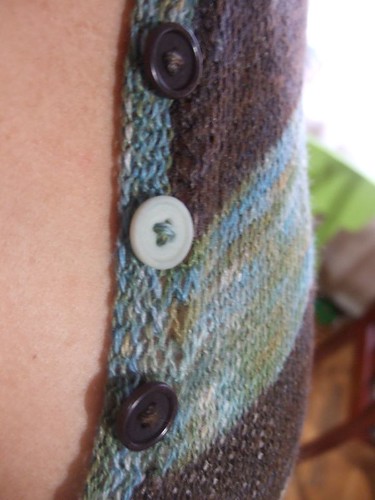 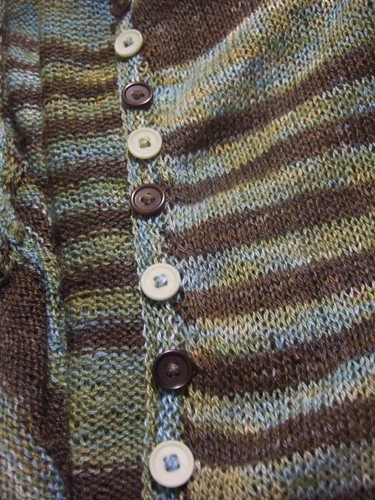 There’s a story behind them. I originally went to the same store where I bought the buttons for my Capitán Hat. I needed 14 buttons for this cardigan and I REALLY did not want to spend over $1 each, as is the norm in this store. So I’m looking and looking and that’s all I find. So an employee comes up to me and says, “Can I help you?” I said, “I need 14 buttons but I was trying not to spend over $1 each.” He actually SMIRKED at me and then said, “Try Lou Lou Buttons on 38th between 5th and 6th and walked away.” THE EFFIN BASTARD!!! I was beyond pissed. Rolled my eyes at him and said, “I sure WILL!” This older woman who was standing nearby had heard the entire conversation. She said, “What address did he say??” I told her and left.

I went to Lou Lou and let me tell you that the customer service was FANTASTIC. I browsed around a bit and finally asked the gentleman there for help. I pulled out my cardigan and he started pulling out buttons!! He said, “A knitter is an artist and the cardigan should express that. I suggest you use different colored buttons.” Damn, the dude was totally right! The older waoman showed up a few minutes afterwards and I asked her opinion on the colors. She says, “Oh, that’s a beautiful cardigan. I’m a Knitter also.” I felt that K needs to be capitalized in Knitter because she said it as if it were a proper name. I agree. From here on in, I feel as if I’ve graduated to a capital K so that’s what you’ll see! Knitter! But I digress….

So, Lou helped me pick out buttons. These are from Ecuador. They’re called Fruit of the Tree buttons made from Corozo Nuts. And guess what?? I GLADLY paid $1 each for these buttons. GLAD.LY!!! And I’ll be back for more. I suggest anyone in the New York area needing buttons go here, too. Eff that other place!!!

Back to Tempest: Altho the schematic on this pattern says the armhole for the size F is 14.5” and the garment stretches ALOT, I can’t wear anything under the sweater. I will have to use it with tank tops only. That’s fine, but it was an easy and fast enough knit that I would love to have another that I could wear over a T-shirt or a button down shirt w/long sleeves. So I started another using Lorna’s Laces, in a size larger!!!! (Grey’s Corner and Mineshaft colorways.) 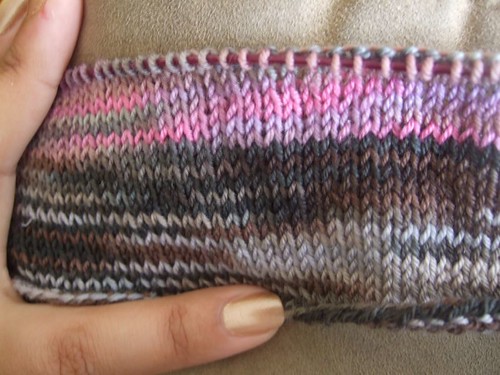 All in all, this is a FANTASTIC pattern. I’ve never knit a cardigan so quickly. I mean, all you have to do is count STRIPES as opposed to counting rows. You’d be surprised as to how much time is saved by this!

Thanks for a great pattern, Weaverknits!

Grandchildren are God's reward for not killing your own children.