KADD a.k.a. Knitter’s ADD.  That’s right.  That’s what I’ve had lately.  I am loving casting on for a crapload of things lately.  And there’s so many more I want to throw on the needles right quick and knit on them as the urge for each comes to me.

Last night, I went to Michael’s to return some yarn.  I got some other, Bernat Satin, because all of a sudden, I NEEEEED an afghan!  Started it last night.  It’s the same afghan I made for Lauren a couple of years ago but in baby blue, navy, dark brown and light brown. 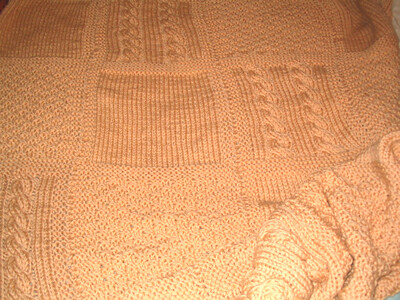 I also started the Lace and Cables Top from the recent Vogue Knitting.  This I’m doing as a KAL with Jeanine.  We’re both using Elann Collection Luna.  Very nice cotton yarn.  I likey a lot.  Sometimes splitty tho.  Here’s a crappy cell phone pic of the beginning: 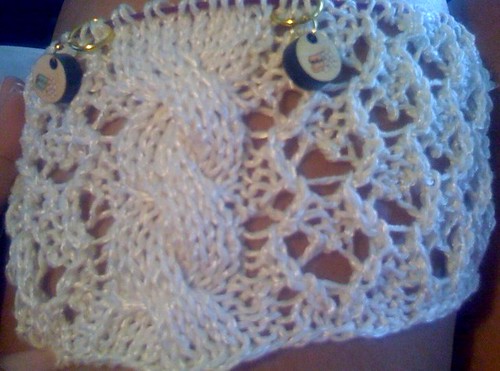 I also want to make a swiffer cover from a free pattern I heard of.  I ordered a couple of crochet ones from Turtlegirl (who I KNOW also has KADD so I’ll let her get it all out of her system and THEN expect the covers.  LOL).  But I want to KNIT one because I fell in love with the colors on Illiane‘s.

I want to start my second Tempest.  Ya’ll saw that I had the yarn skeined up for that earlier this week.

I am going up the leg of my Nanner socks but here’s a pic of the heel. 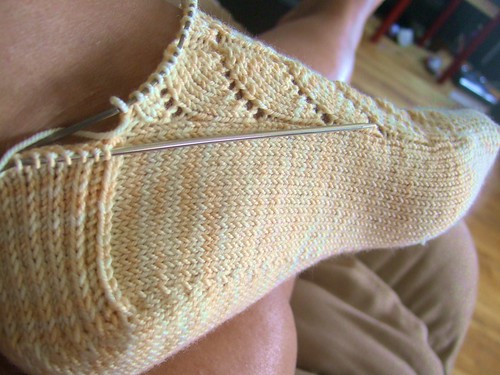 I want to cast on for a lace project with a special yarn that is probably already at my office.  Probably a scarf.  It’s only 350 yds and I want to use EVERY last drop!!!  Maybe I need to look up the Ene Scarf from IK or the Swallowtail Shawl to see if those two are the type that you can keep knitting til you run out of yarn – unless any of you can recommend a triangular shawl pattern that works like that.  (I plan on ending the Goddess Knits’ Anniversary Shawl about 76 rows earlier than the 100 row chart calls for.  Heh.)

I want to pull out my BOG JACKET and finish it!!  Ya’ll remember that??  I’m sure you don’t.  I started this in January, 2007.    I definitely forgot what point I’m up to in the pattern so I’ll have to do some thinking. 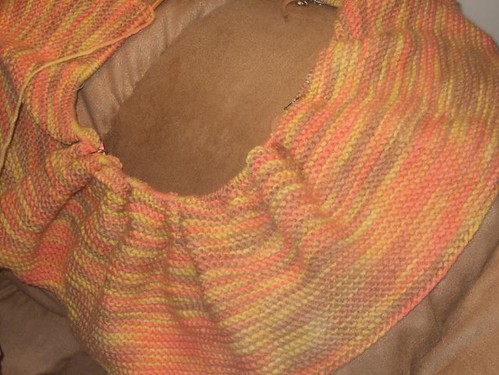 I want to make some stuff for a few swaps I’m in over the next couple of months.  That’s right.  I said a FEW swaps.  LOL  I’m doing the Birthday swap in August with Batty and Cristi.  YAAAY!  We did it last year and I loved it.

What happens with starting all these WIPs is that the FO part starts to lack.  In the meantime, I DO have one:

Say “hello” to Lukie’s sister, Miranda!  Ain’t she cute?  Homegirl needs a serious day at the hair salon to fix her do, but you can blame her maker’s lack of hair sewing skillz.   Who KNEW sewing on hair was so COMPLICATED?!   🙄  🙄 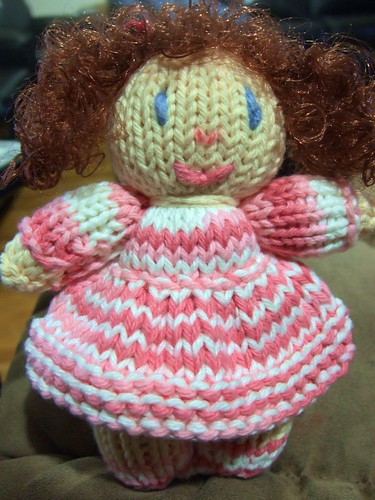 She even has PANTIES!! 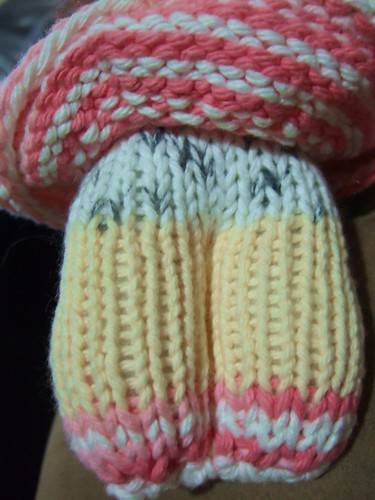 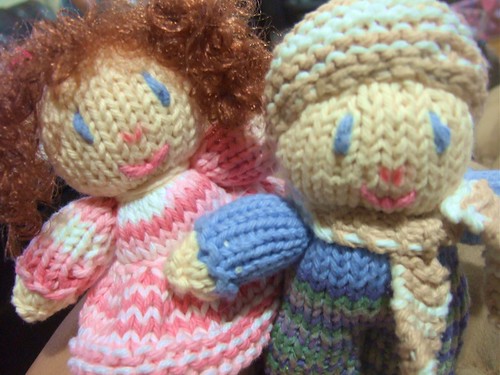 Well, I’m off to knit on my afghanlaceandcablenannersocksshawl!!

Each place has its own advantages - heaven for the climate, and hell for the society.
Mark Twain