Hiya.  Thank you for all the birthday wishes to hubs.  He had fun reading them.  😀

So remember how at the end of last year I started loving dpns again?  The love intensified when I found Lantern Moon Sox Stix.  I bought my first two sets from Cristi who was destashing; and, that’s it.  I’m officially HOOKED on them. The ones I got from Cristi are ebony wood.  I then went and purchased a rosewood set from The Loopy Ewe but I don’t love them as much as I do the ebony.  They’re ok, just sharper and I don’t really like sharp needles (as you’ll soon find out).  I prefer my needles blunt and rounded.  Like me. 😉

As my last FO of 2008, I made a pair of Knotty Gloves on the Sox Stix.  These are my first gloves.  With fingers, that is.  I have always made mittens or fingerless or wristwarmers.  Never full-fingered gloves.  Can you say LOVE??  And, WARMTH?? 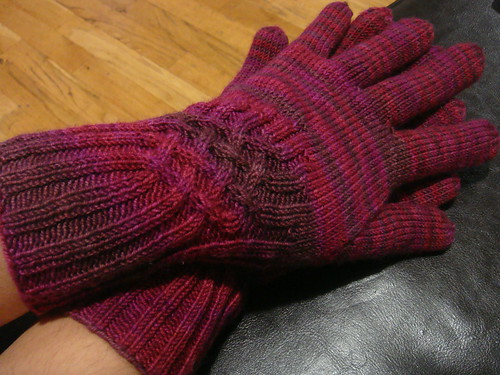 I used some gorgeous STR Mediumweight that I got from Cristi a couple of years ago in one of our Bday swaps.  The colorway is Backstabber.  No, she wasn’t trying to tell me something.  I hope.  LOL  Ain’t it gorgeous though??

During my holiday vacay, I cast on for a pair of New England socks (from Knitting on the Road by Nancy Bush).  I used some Koigu yarn I’d gotten from the Yarn Tree when they had all of their Koigu on sale because they will not be carrying it anymore. 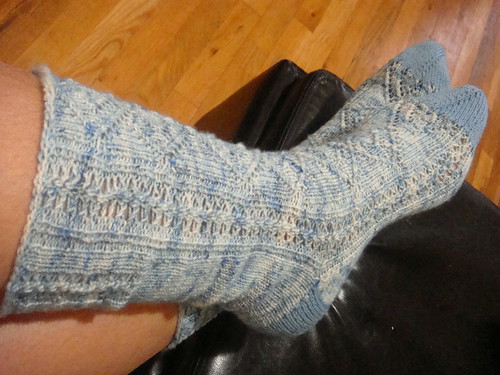 Koigu never has enough yardage for my size 11 feet, so I did the heels and toes in a solid-colored Louet. 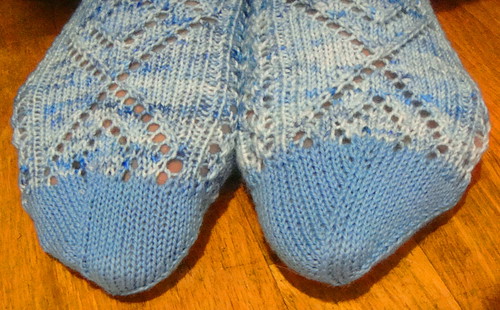 I love the star-shaped toe on these socks so much that I’m using it on all of my top-down socks from now on.  It’s so easy to do (you just k2tog at 4 even points every other row until you have half the sts left, then dec every row until you have about 8 sts left – no grafting!) plus it fits my feet better than a square toe. 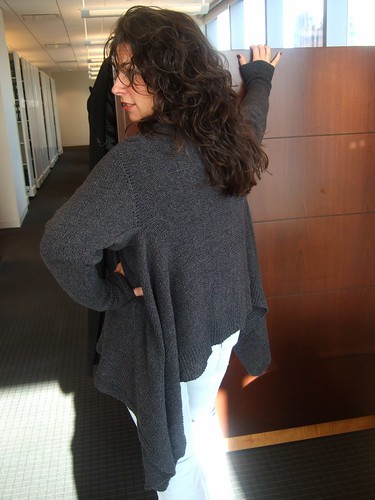 Back in September, my boss commissioned me to do some knitting for her as a holiday gift for her sister.  From this, Wrapped-About was born. 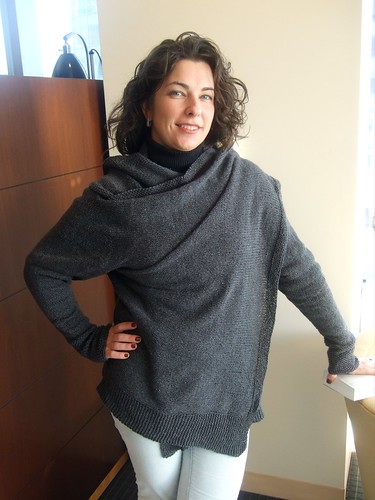 Be it Barney’s or the Dollar Mart, Rich Housewife or struggling single mom. Stay fashionably wrapped while you’re out and about. The only requirement for this pattern is the wearer MUST be GROWN AND SEXY! 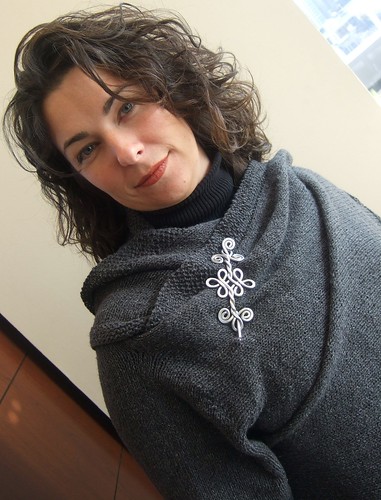 Holiday knitting is running rampant around all blogs.  I needed to do a few myself.  My favorite so far is the noble cowl for my Big Boss attorney. 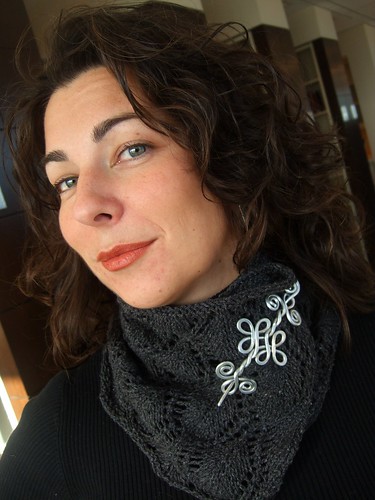 It’s modeled here by the gorgeous Amy (vespagirl on Rav).  I used Elsebeth Lavold Silky Wool in a beautiful charcoal gray.  The pin is from Nicholas and Felice (my new favorite shawl pin etsy shop).   I purchased several as gifts this year.  I LOVE them. 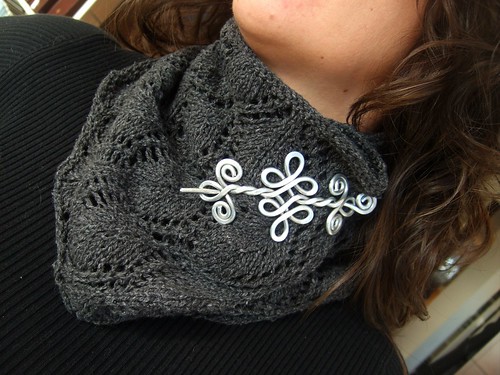 So, how is your holiday knitting coming along?