Sometimes I wonder where these designers come up with these names.  Audrey in Unst.  I had to Google Unst because at first I thought it was an emotion (you know, like Jackie in Pain or something).  Apparently, Unst is an island.

Anyway, I finally took pictures of my simple black cardi I made for work.  It’s the Audrey in Unst pattern (SURPRISE!) from the Fall 2009 Twist Collective.  In this case, it’s me in Staten Island (HEY!  It’s an island!!!). 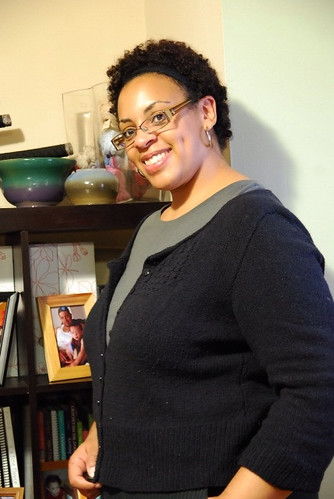 I used one of my fave yarns to work with, Elsebeth Lavold Silky Wool in Black.  But guess what?  The shit ain’t BLACK black.  It’s more of a washed out, dull black.  Annoying as all get out when you try to wear it with BLACK BLACK pants.  I mean, black is supposed to go with everything, but, guess what??  Washed out black doesn’t go as well with BLACK BLACK. 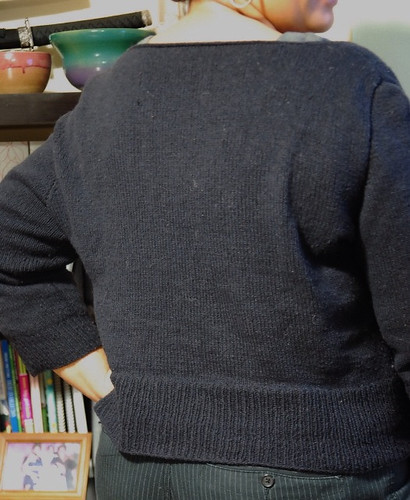 I might’ve knit it about an inch longer than called for in the pattern.  I can’t remember at the moment.  Let’s pretend I did.  I definitely know that I opted to lengthen the sleeves somewhat.   I didn’t want elbow length.  I went for 3/4 – could’ve gone longer but I was bored and had Holiday knitting to do!   Also, I went with plain ol’ k1, p1 ribbing everywhere it called for twisted rib because the non-blackness was just washing out the twisted ribbing – pun TOTALLY intended. 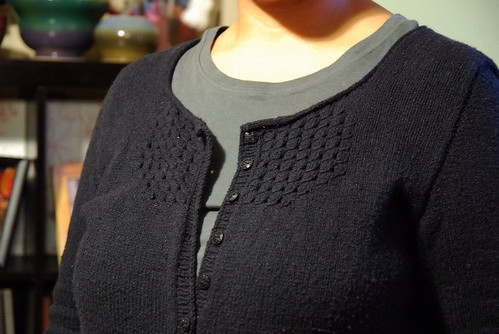 I love the little detail at the neckline, just enough lace.  For the buttons, I went to what Cristi calls the Button District here in NYC.  It’s not really a BUTTON district.  It’s just the Fashion District’s button shops of which there happen to be more than many.  In this instance, I visited the shop where the dude helped me pick out buttons for my first Tempest, Lou Lou Buttons.  Lou did such a good job on that selection and I needed help picking out buttons again.  He didn’t disappoint me as I knew he wouldn’t.  He picked out some very nice black buttons that have some sparkle to them and stand out just the right amount without being flashy or BLACK BLACK (sigh….).

All in all, I’m pretty happy with this cardi.  It’s quite warm, light and comfy which is what I wanted in a work cardi.  The pattern is well written, too, so no complaints there. 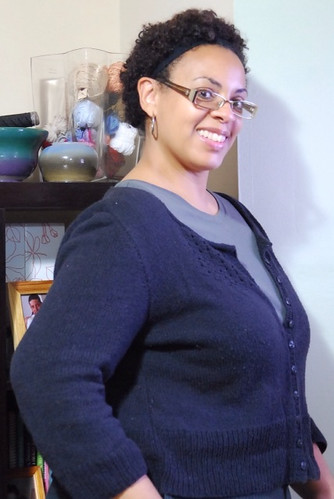 Cristi and I are in the middle of planning a 2011 KAL.  We hope you’ll join us.  More details to come soon!

I have wanted to design a triangular shawl knit from side to side for a while now.  I knew I wanted the edging to be knit along with the rest of the shawl to make it nice and simple. 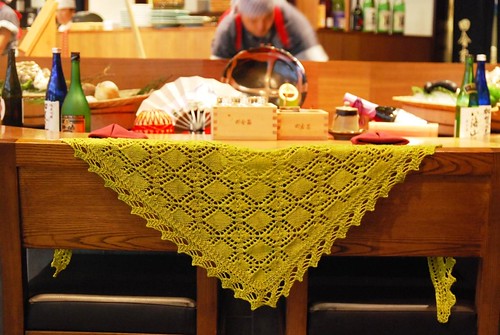 After various messages back and forth with Anne of Alpha B Yarn, we decided to pair up her yarn with one of my designs.  She dyes the most beautiful, saturated colors.  Her base yarn is of very good quality.   It washes well and blooms beautifully. 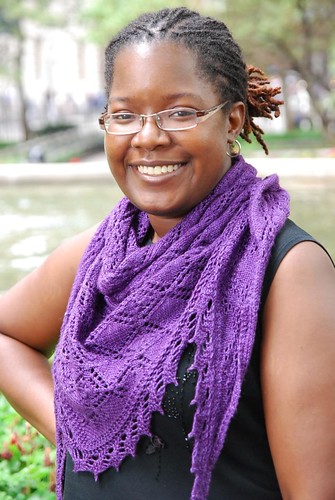 Doesn’t Tawana have a beautiful smile??

This shōru design is inspired by Japanese stitches and the rich colors in Japanese culture. You knit it by starting in one corner, increase towards center-back and then decrease towards the opposite corner. With this method, you can estimate (or weigh the skein) when you are halfway through your yarn before you start knitting the other side of the shawl, ensuring that you have enough yarn to complete it. Make it as large or as small as you want by knitting more repeats. 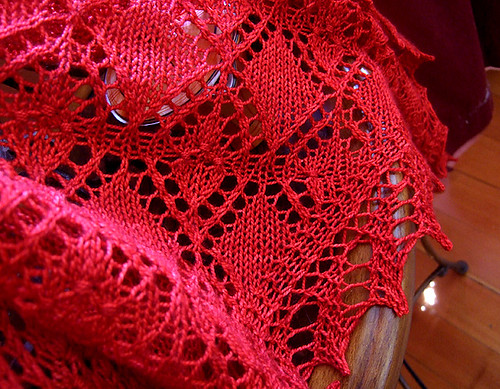 My favorite aspect of Shōru’s design is the three wraps.  This adds a pretty simple detail without needing to make nupps where you have to p9tog or something crazy like that. 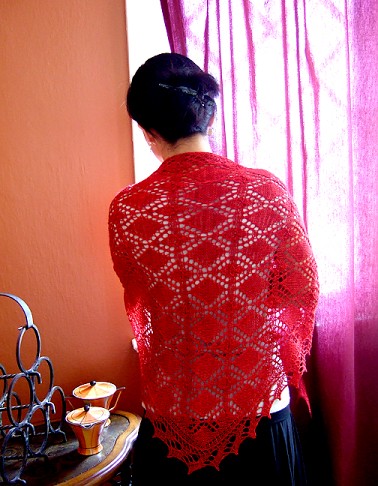 So run and buy your own skein of Alpha B, knit your own Shoru and wrap yourself up in elegant comfort.

I have so many ideas running through my head as far as designing and knitting OPP’s (Other People’s Patterns).  My mojo is in overdrive right now.  I thought I’d take advantage of that and get a head start on Holiday knitting!  If any of you know me at all, you know that I knit for very few others.  Most of my handknits are for me.  Somewhat selfish but it’s hard to find appreciative people!  But I digress…

The minute I saw this Through the Woods pattern I knew it would be perfect as a gift for my friend Lauren.  She is having had a baby this month and will probably be out strolling around Central Park with him this fall and winter.  (She had the baby while this post was still in draft form!  YAAAY!  Congrats, L & R!)   She hates wearing hats since she thinks they don’t look right on her so she usually freezes instead.   This hood and cowl combo seems like a perfect solution to me. 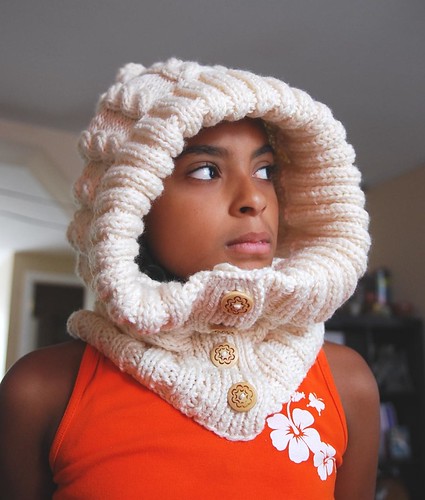 The pattern is a very simple knit (I can hear you all groan out there saying that I ALWAYS say that!).  But I SWEAR that it is!!  The main cable part is knit back and forth in rows; you seam the hood; pick up sts around hood and knit that ribbing; pick up sts along bottom edge and knit that part; then pick up and knit for button bands.  See??  EASY PEASY! 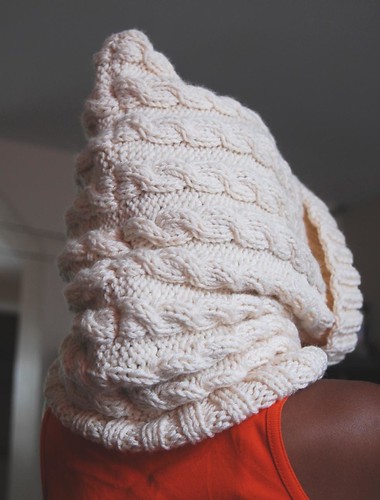 In my humble opinion, the hood is a bit small.  Esmie is 12 and you can see that it fits her almost just right.  Lauren is petite so it will fit her, too.  I did get gauge.  So if I were to knit this for myself, I would probably have to knit the hood larger, probably just by making the main piece longer by a few inches and adding a repeat or two to the cable pattern. 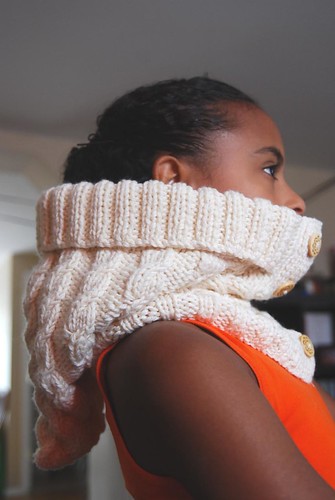 After taking these pictures of Esmie modeling for me, I think she needs one for herself this winter, too.  I’m probably biased but my girl is rocking that hood with her orange tank top! 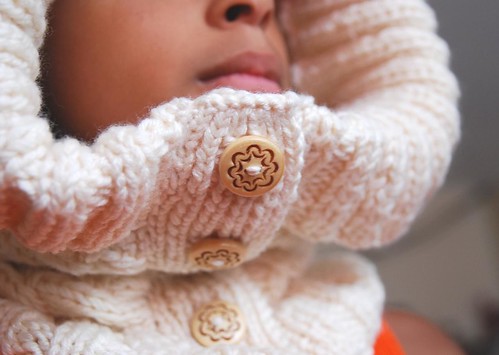 At a cocktail party, one woman said to another, "Aren't you wearing your wedding ring on the wrong finger?"