The Sidewinders are FINALLY done!! THANK THE HEAVENS!!! I was sick of these socks taking up room in my knitting basket making me look all unaccomplished!! LOL

These socks are not necessarily difficult but I was quite upset that they didn’t FIT when I finished the first that I waited an entire year to knit the second sock!  That’s my one finished Ravelympics WIP. 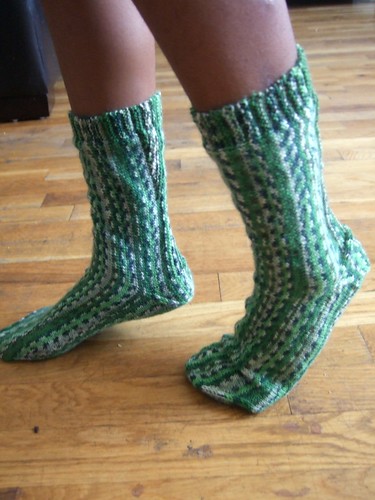 I have a way more exciting FO for you than these socks tho. And way prettier, IMHO! 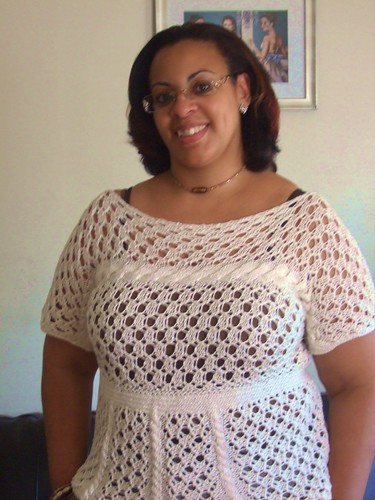 The Lace and Cable Top! It’s DONE!! YAAAY! I LOVE IT! I have only one complaint: I think the boat neckline is too wide and it falls off the shoulders (one or the other shoulder, but not both at once). I may have to seam up a bit on each end. 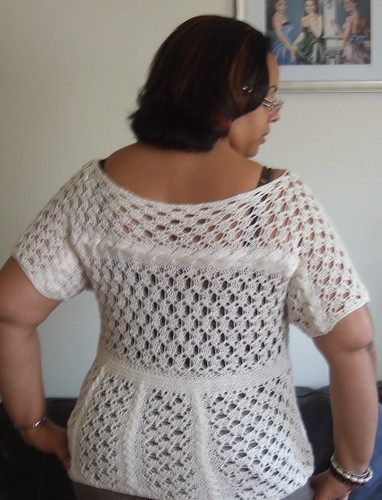 I really like the fit of it. The yarn that I used, Elann Luna, really feels great against the skin. One thing tho, you have to be careful not to snag the top on anything: your bag, the seat on the train, your chair at work, etc. Cuz the yarn is soooo splitty that even knit up if it gets caught, that piece won’t look too pretty!

The lace repeats are very easy to remember so it is a very fast knit (if that’s all you have on your needles, but we all know that I have that KADD!).

Here’s a gratuitous boob shot close-up of the lace: 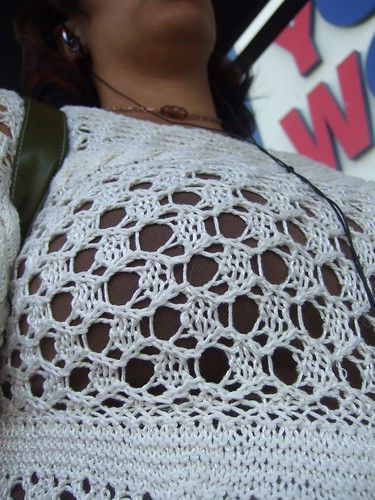 Right now I’m trying to finish up a quick baby blanket that my cousin asked me to make for her to take the baby out of the hospital with. She asked me last Saturday. She’s due September 1st. Oy. WISH ME LUCK!!!!

And away we go!  The first ever Ravelympics have started since Friday.  I decided that it’s best I just clear up some of the TWELVE WIPs I have on the needles at the moment, hence WIP Wrestling will be my event.

I started yesterday with the Sidewinders that I started exactly a year ago. 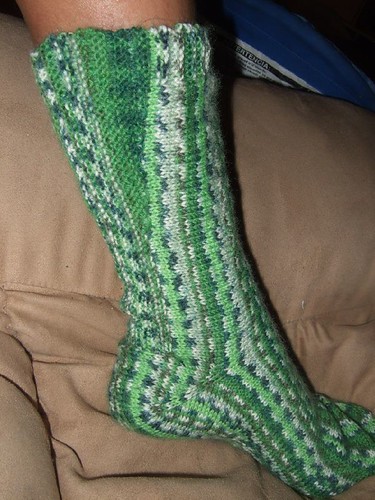 I knit the one sock and then it didn’t fit.  It does fit Esmie though so these will be great school socks.  I got through half of the second sock yesterday and plan to finish it today.

Did ya’ll get to run over to Cristi’s blog and wish her a happy birthday yesterday?  She’s a year younger now!  :o)

First of all, thank you all so much for your warm comments and virtual hugs. Thank you to each and every one of you that emailed me and shared personal stories with me much like my own. In a sad way, it was nice to know that I’m not alone in having had such a weird life. I hope that all of you can find peace and a good side to your sadness as I will now try to find in this unfortunate event in my life. I hope to finally be able to meet my half-brothers and sisters and maybe form a relationship with them. I want my children to see what a NORMAL family is like. My father’s side of the family seems to be a good example of normal, loving people. I’ve gotten to speak to my aunt and uncle (father’s siblings). I will be meeting up with them soon.

As usual, the needles have not stopped around here. The same way that I cast on for a BUNCH of socks not too long ago, I’ve now been 100% into knitting sweaters. Right now I have FIVE sweaters OTN: four fully active and one that has been asleep for quite some time in the WIP basket.

Let’s start with the Somewhat Cowl (Yarn: Marshmallow from Decadent Fibers). I am progressing rapidly on this one as it’s mostly stockinette and am now halfway down the body. I don’t plan to make this as long as what the pattern calls for (24″ finished length in my size). With my gut I can’t make sweaters that extend too far below my waist or they get a crease line. HA! Here’s an upside-down shot of it: 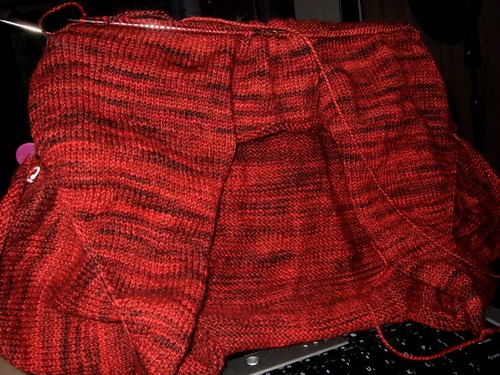 Next up is the Central Park Hoodie (Yarn: Araucania Nature Wool). I’m knitting this sweater seamlessly except for the sleeves so it went way faster than usual. I also don’t like how the cable is stopped abruptly at the start of the hood in the pattern so I’ve continued the cable. I’ll make notes of my changes in case anyone is interested. I’m more than halfway through the hood and then on to the sleeves. 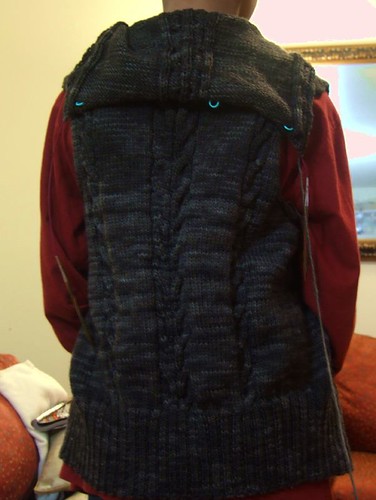 Number 3 is the Fairly Easy Fair Isle (Yarn: Knit Picks Wool of the Andes Bulky). There’s not much going on here. Stockinette until I get to the top part. 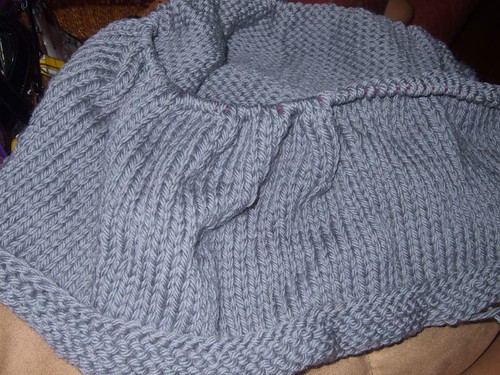 The fourth has been on the needles for quite some time and hasn’t been touched in ages. So not much to talk about there. It’s the Bog Jacket by Elizabeth Zimmerman (Yarn: Makalu Yarns Lambgora). 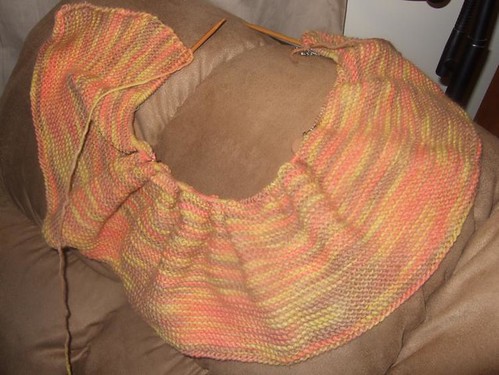 Lastly, but DEFINITELY not least is my current train knitting: Cable-Down Raglan (Yarn: Shelridge Farm W4). Jeanine mentioned NaKniSweMo so I joined up – as IF I needed an excuse to cast on yet another project. HA! Cast on right on the 1st of Nov. I’m loving the knitting. I DID have to rip yesterday tho because I was NOT liking the raglan increases as instructed in the pattern (kf&b on either side of raglan marker). So after I ripped back I decided to use my new favorite increases: LaLinc and LaRinc, as described by Cat Bordhi in her New Pathways for Sock Knitters book (that link brings you to a video of it. I love these new increases so much that it’s the same ones I’m using for the Somewhat Cowl above.

Here are pictures of the old raglan increases.  See how different they are on either side? 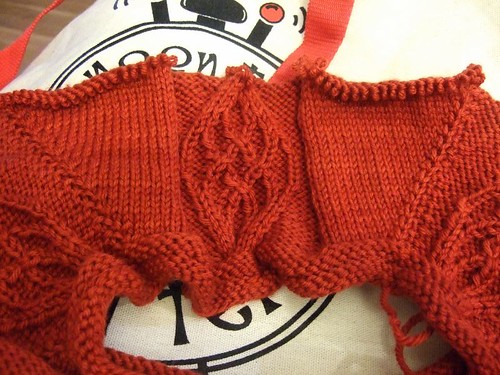 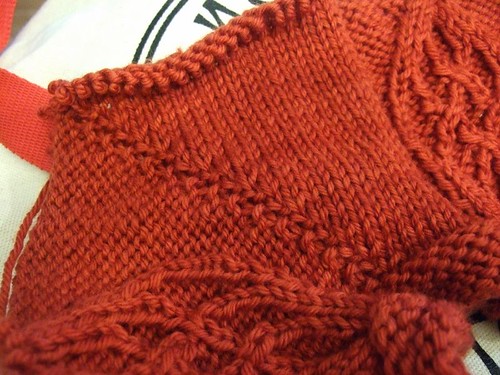 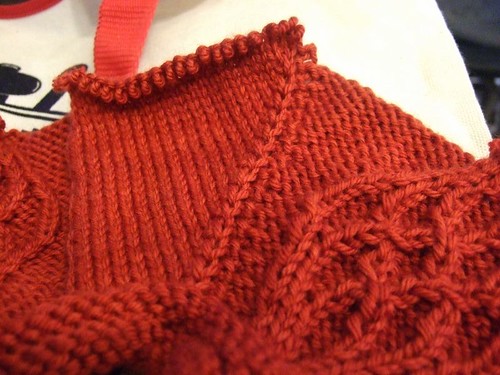 Now check out these MUCH NEATER increases.  These match up way better. 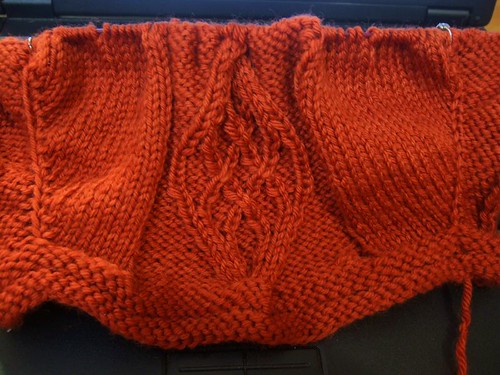 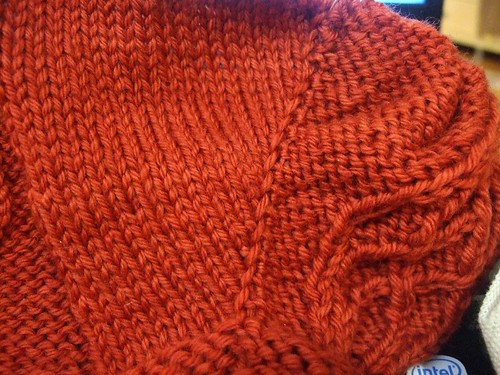 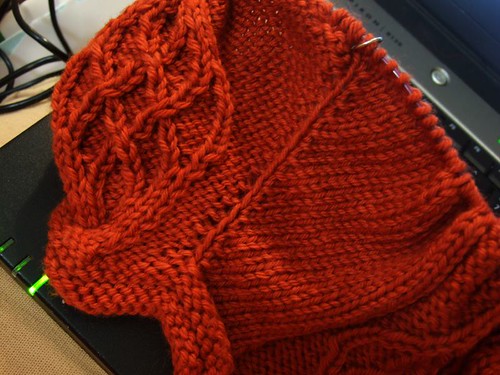 I’m not COMPLETELY happy with these either but it’s because half the increases are done on reverse stockinette so they’re forming tiny little holes. Do you see them in that last picture? Anyone got any suggestions for me on that?

Well, that’s all for now folks. I also knit on all those second socks sometimes and sooner or later will have a few finished pairs.

(Translation: An exceptional marriage does not happen when a "perfect couple" marries. It occurs when an imperfect couple learns to enjoy their differences.)